North Carolina’s U.S. Senate race is a statistical dead heat with the economy as the driving issue for voters in all parties, according to a WRAL News Pollreleased on Monday.

The poll, which was conducted in partnership with SurveyUSA from Wednesday to Sunday, reported a credibility interval of 4.4 percentage points. A credibility interval is similar to a margin of error but takes into account more factors and is considered by some pollsters to be a more accurate measurement of statistical certainty.

Political onlookers say the race will remain tight leading up to Election Day on Nov. 8, with the economy and concerns over abortion access having an outsize influence on the results. 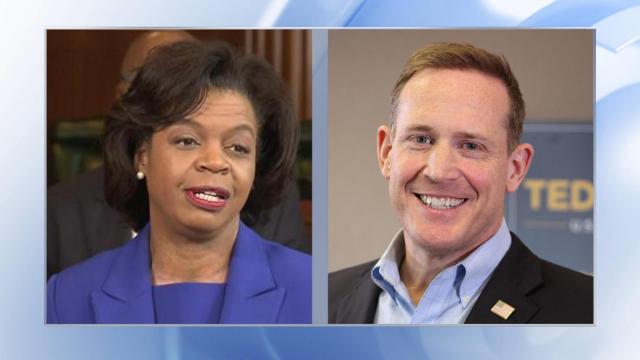 “What we’re seeing here nationally as well as in the state is there are a lot of crosswinds,” said Doug Heye, a Republican strategist and former communications director for the Republican National Committee who worked on three successful North Carolina U.S. Senate campaigns.

Who has the edge?

Republicans, Democrats and unaffiliated voters overwhelmingly cited the economy as the top issue on their mind heading into the November election and abortion as a distant second.

Asked what issue is most important in determining whether they’d vote for Beasley or Budd, 44% of respondents listed the economy as the top issue, followed by abortion at 17%, health care at 9%, immigration at 8%, crime at 5%, guns at 5%, education at 3% and taxes at 3%. Five percent of respondents considered other issues more important. 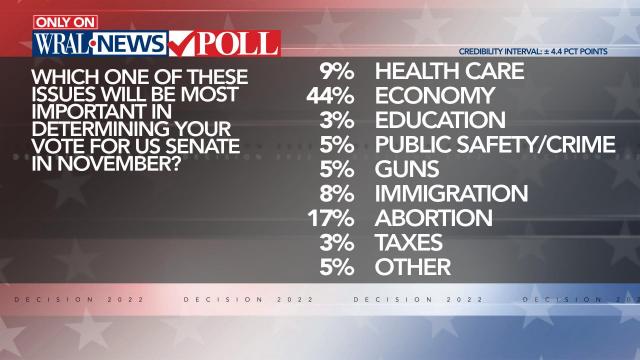 Heye said Budd is in a more favorable position in part because the economy is showing few signs of the improvement voters are seeking. He cites higher costs of goods and services as a drag on Democrats politically. Despite plunging gas prices, U.S. inflation ticked up in August. Prices were up 8.3% year on year. He said Budd needs to largely speak to voters’ economic frustrations when he debates Beasley on Friday.

“The economy seems to be [returning] as a more important issue than it was just just a few weeks ago,” Heye said. “That should give Budd a slight upper hand here, but he'll still have work to do and the debate will be important.

Brad Woodhouse, a North Carolina native and senior adviser to the Democratic National Committee, thinks Beasley has the edge to pull out a victory. He notes Beasley ran two previous successful statewide judicial campaigns and outperformed the presidential and U.S. Senate candidates on the ballot in 2020, when she narrowly lost her reelection bid for chief justice on the state Supreme Court. 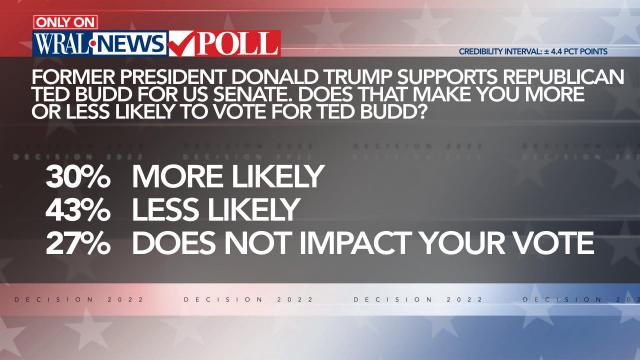 Woodhouse views Budd’s refusal to certify the 2020 presidential election results and the subsequent endorsement Budd got from Trump as a political bonus for Beasley.

"The fact that this race is this close, I think speaks to what a talented candidate she is, what a campaign she's running and how difficult it's been for Budd to escape from his past support for election denialism and his support for Trump,” Woodhouse said.

Nearly half of NC Republicans have little to no confidence ballots will be counted properly this year, WRAL poll shows

Undecided and unaffiliated voters could very well determine whether Budd or Beasley wins, and the state of the economy by Election Day could be the ultimate decider.

“If there's anything in the polling results that might say how undecided voters would go … it might be the economic issues, depending on how the economy goes in the next five weeks,” said David McLennan, a professor of political science at Meredith College. “We'll get a jobs report, we'll get some inflation numbers between now and Election Day. That could be ultimately the determining factor on those few voters that could make a difference.”

National dynamics are very much at play in North Carolina’s U.S. Senate race. During the primary, former President Donald Trump’s endorsement played a critical part in Budd’s victory. Last month, the two campaigned together in Wilmington.

Heye said the result shows North Carolina voters who may have supported Trump once or twice before have become exhausted by him. Because Budd heavily messaged the Trump endorsement in the primary, he now has to walk a tightrope of appealing to moderates without alienating hardline conservatives. He said he’d advise Budd not to have Trump return to the state.

“There's a bit of a devil's bargain that you make with Trump,” Heye said. “If he wants to come in for you, you say yes just to somewhat contain it. Because, if you say no, here comes the screed against you. So you have the event, and you move on.”

While Budd has embraced Trump’s support, Beasley hasn’t joined officials in President Joe Biden’s administration during recent visits to the state. Beasley didn’t attend events last month with Vice President Kamala Harris, Treasury Secretary Janet Yellen or Environmental Protection Agency Administrator Michael Regan. Beasley’s campaign has cited scheduling conflicts. In the case of the Harris visit, the campaign said: “Cheri is focused on her campaign to give North Carolinians a senator in Washington who will work for them.”

Who would win NC in 2024? Biden and Trump neck-and-neck in hypothetical rematch, WRAL News poll shows

The WRAL News poll showed Biden remains deeply unpopular in North Carolina, though he is viewed more favorably than Trump.

In a potential 2024 matchup, Biden has a two-point edge on Trump among 918 registered voters surveyed. That’s within the credibility interval of 3.9 percentage points. While 43% of respondents approved of Biden’s job performance, 55% disapproved.

“The specific result of Biden beating Trump should probably send the signal to Republicans that if Joe Biden is at this stage leading Donald Trump in North Carolina, it may be [that] allegiance to Donald Trump isn’t the smartest thing in the world for Republicans,” Woodhouse said. 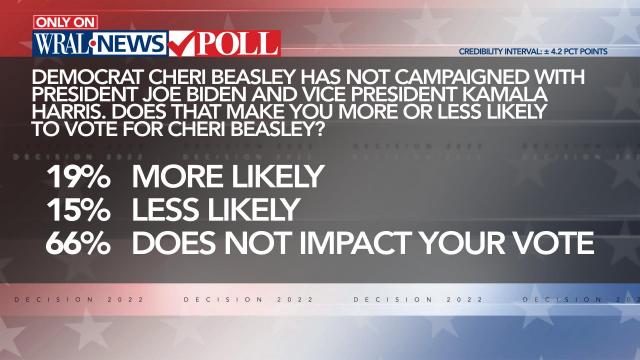 The poll results suggest that Beasley’s apparent distancing from Biden may frustrate some Democrats who are staunch Biden supporters, but it also could prove helpful to Beasley.

Two-thirds of respondents, including 62% and 70% of unaffiliated voters, say Beasley’s lack of campaigning with Biden or Harris doesn’t impact their vote.

If anything, voters appear to welcome it. One-quarter of registered Democrats and 21% of unaffiliated voters said the refusal to campaign with the president and vice president makes them more likely to vote for Beasley, while 13% of Democrats and 9% of unaffiliated voters said it makes them less likely to support her. The credibility interval for the question was 4.2 percentage points.

“You don't want to offend Democrats that are strong supporters of the president or the vice president,” Woodhouse said. “As close as this race is, whatever Cheri Beasley is doing seems to be working. And in that regard, she should probably stick to it.”

Both candidates traded barbs late Monday, a sign of how close the race is.

Budd said voters are concerned about inflation, crime and education. When asked about how he would improve the economy and make things easier for North Carolina consumers, he described who wasn’t: Beasley. He said he would like to see increased energy production, but then turned his attention to things he opposed: the American Rescue Plan, student debt forgiveness, and the addition of Internal Revenue Service agents.

“Everything I do is about making life better for those here in North Carolina,” Budd told reporters at a meeting of western Wake County Republicans. “And Joe Biden is about making things worse, and those are the policies Cheri Beasley would support.”

Beasley wasn't available for an interview, her campaign said. In a statement, Beasley campaign spokeswoman Kelci Hobson said Beasley was “traveling across the state and meeting voters.”

“Voters know that Cheri is the only candidate in this race that will put them first, as Congressman Budd continues to cozy up to special interest groups at North Carolina’s expense and attempt to roll back the rights of North Carolinians at every turn,​” Hobson said.