The latest ECU Poll, conducted September 7-10, shows a competitive contest in North Carolina’s upcoming U.S. Senate election, with Republican nominee, Ted Budd, winning the support of 49% of likely voters compared to 46% for Democratic nominee, Cheri Beasley. Just 4% of the poll respondents report they are undecided (with the remainder expressing support for some other candidate). The Senate race in North Carolina has narrowed significantly since a previous ECU Poll conducted in May, where Budd led Beasley by 8 percentage points among registered voters. 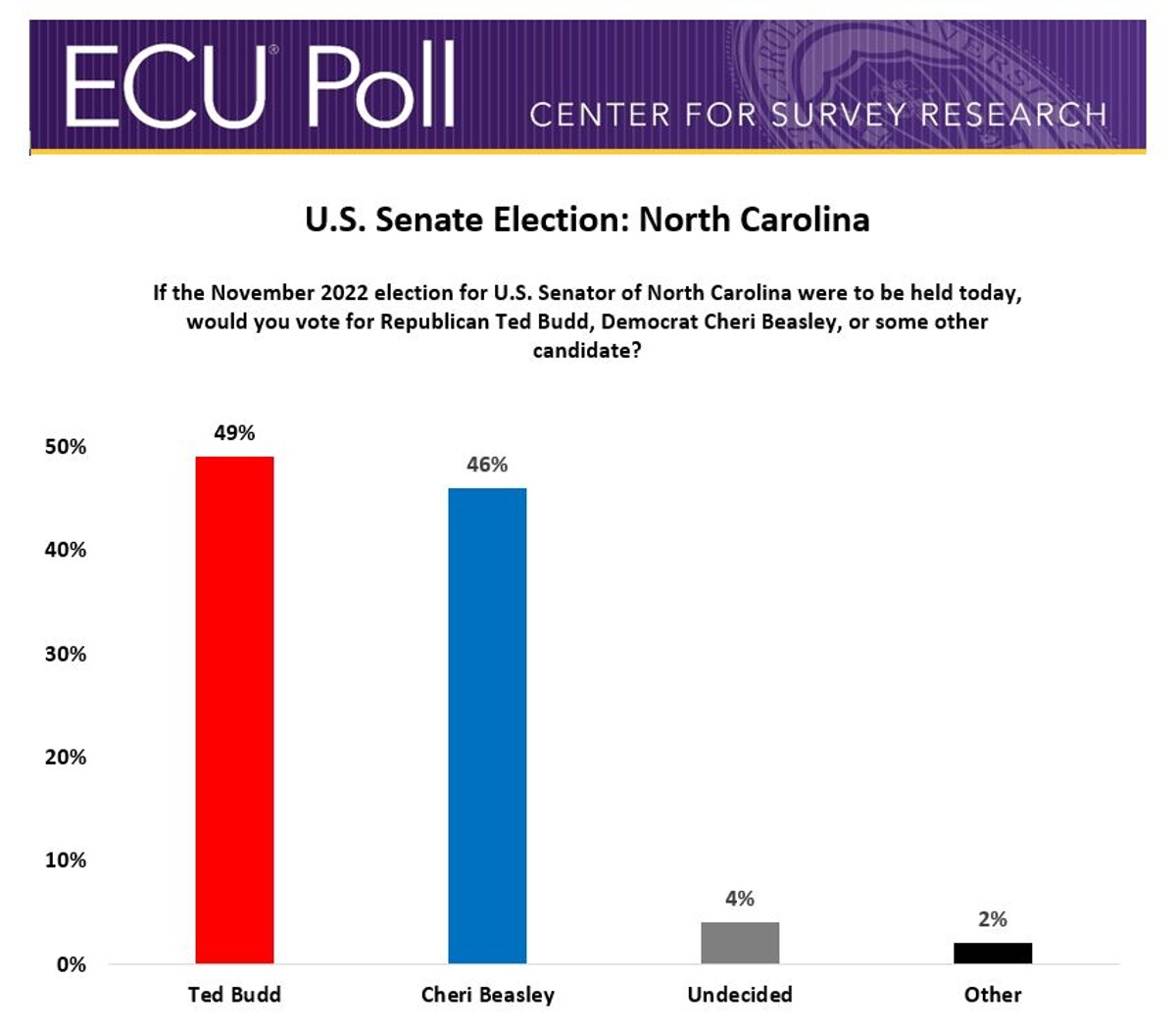 Beasley’s most notable gains since May have come from women. Beasley currently leads Budd 52% to 41% among likely female voters. (She previously trailed Budd, 44% to 40% among registered female voters in May.) Budd, however, holds a significant advantage among men. In the latest poll, Budd leads 58% to 39% among likely male voters.

In addition to the Senate race, respondents were asked how they plan to vote in their U.S. congressional district races. The poll’s results show that 49% of likely voters say they intend to vote for the Republican candidate and 46% say they will vote for the Democratic candidate. The current Republican advantage in North Carolina is slightly better than the national average, which is a virtual tie (Democrats + 0.4%).

The current and increasingly competitive electoral environment in North Carolina also follows improving evaluations of President Joe Biden’s job performance. Approval for President Biden among likely voters in North Carolina stands at 44%, up significantly from May when Biden’s approval numbers stood at just 35%. When asked how they would vote if the 2024 presidential election were held today, and the candidates were Joe Biden and Donald Trump, the race would be too close to call, with Trump at 46% and Biden at 45%.

In assessing the full results of the poll, Dr. Peter Francia, Director of the ECU Center for Survey Research, remarked, “Historically, midterm elections are almost never kind to the party in the White House. This puts Democrats at a disadvantage, especially in North Carolina where Republicans have won the last four U.S Senate elections in the state. However, several developments, such as the ruling of the Supreme Court in overturning Roe v. Wade and improving numbers for President Biden’s job approval, also cannot be ignored. There appears to be some growing momentum for the Beasley campaign. In such a close election, the next several weeks of campaigning could be critical to determining whether Ted Budd or Cheri Beasley will be North Carolina’s next U.S. Senator.”

This poll was conducted September 7-10, 2022. The sample consisted of 1,020 likely voters in North Carolina, with a Credibility Interval (CI), similar to a poll’s margin of error, of +/- 3.6 percentage points. The data for the poll were drawn from a cellphone sample of SMS-to-web (N=488) provided by Consensus Strategies, an Interactive Voice Response (IVR) system of landlines only (n=326), and an online panel provided by Cint (formerly Lucid) (N=206). To ensure the sample was representative of the midterm electorate, the data were weighted by gender, age, education, race, region, and election modeling based on previous statewide elections in North Carolina.