Empty newsrooms and the future of media

On the evening of April 5, the UNC Chapel Hill Program for Public Discourse and Duke University’s Polis Center for Politics held a “Journalism and Democracy” eventas part of the Abbey Speaker Series. The three veteran journalists present discussed the future of journalism, especially as how it relates to the collapse of local journalism, misinformation, democracy and diversity within newsrooms. 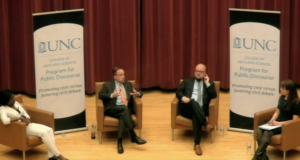 The three panelists were John Hood, who founded Carolina Journal during his over two decades as president of the John Locke Foundation and is now president of the John William Pope Foundation; McKay Coppins, “author and staff writer at The Atlantic covering journalism, religion, and Republican politics;” and Nafari Vanaski, a “freelance writer who worked in newspapers for 17 years, writing for North Carolina and Pittsburgh publications such as Star-News and the Pittsburgh Tribune-Review.”

The moderator, Molly Worthen, a contributing opinion writer for The New York Times and associate professor of history at UNC Chapel Hill, opened the event by joking about the weather and Chapel Hill’s recent loss in the NCAA men’s basketball national championship game.

“I appreciate you braving the rain and the general cloud of malaise that is hanging over our campus after last night,” Worthen said. “And we’re going to do our best to cheer ourselves up by talking about the decline of civilization, right? It’s going to be awesome.”

Worthen began the discussion by asking the panelists if there were any recent events that particularly made them worry “about the state of American media and its relationship to democracy.”

Vanaski addressed the question first and said the thing that concerned her was the recent banning of books by school boards across the country. She said that in the past there were journalists covering these meetings, so parents could hear about it and challenge the board’s decisions. But now, with fewer papers covering local news, they only hear about it after it’s done.  Hood largely agreed.

“It’d be very easy if we talked about the last five years to immediately zoom into our favorite national political story, and this was outrageous, no, that was outrageous,” Hood said. “Perhaps we’ll get into all that. But for me, the area of greatest concern really is state and local journalism. Whenever we think of national journalism, there’s still a lot of it, arguably more than anyone could consume, or should.”

Hood told a story about how he visited a newsroom recently — which he frequently does as “customer service,” to meet editors who are publishing his syndicated column — but it looked “largely deserted, as if there had been some kind of natural disaster.” He said the newsroom was emptied of reporters except for one corner of the building.

Hood has also heard from locals that very important council meetings are going unreported on, even when their local officials are not getting multiple bids for big contracts, as required by law. But nobody is there to report on it or hold them accountable.

“One of the greatest dangers right now to the practice of democracy is simply a lack of raw material, information, about what is happening in our communities because the business structure of newspapering has been kicked out from under it,” Hood said, adding that we “better get on the ball” to figure out what to replace it with, because this is a “ticking time bomb.”

Coppins said the events that made him most worried about the future of journalism had to do with hedge funds buying up local newspapers and downsizing them to make money. He cited a trip to Chicago where a journalist friend showed him the old Chicago Tribune building where 700 journalists used to work, and then took him to their new offices. Coppins said the new office is the size of a Chipotle, with only 50 to 100 journalists working there.

“Hedge funds like Alden Capital are not responsible for the decline of local news,” Coppins said. “There have been a lot of market forces and forces in our society that have led newspapers to get to this point. But we’re now at a point where local newspapers across the country are so weakened and so undesirable as assets that really aggressive, ruthless investors can buy them and gut them and nobody is noticing.”

Coggins wrote an article for The Atlantic on Alden Global Capital and its gutting of local newspapers that can be read here. He argues that once a local newspaper is gutted, research shows many negative effects, like a drop in voter participation, the spread of misinformation, and even the ballooning of local budgets “because there’s no watchdog keeping track of where this money is going.”

Later, Coggins and Hood agreed that there has also been a nationalization and sensationalizing of news stories. This means that local people who have not followed the school board or city council and have no opinion of the officials suddenly become very polarized and energized by a national story that covers their local area, even if it is not an accurate or nuanced version of the events.

Vanaski seemed to disagree that the blame for the decline could be placed on consumers drifting by choice towards nationalized and sensationalized coverage, saying the change was happening “by force” and that she believes local people really do still want to read the local newspaper, but it’s just not available.

“I do think there’s an appetite for local news, and not feeding it is what’s leading to everything,” she said.

The moderator, Worthen, then turned the conversation to objectivity and if that is suffering with the death of local news. She defined “objectivity” as a loyalty to facts over values in reporting.

Hood was the first to respond and said while he doesn’t think objectivity is entirely possible, journalists should seek to be accurate, fair, and balanced in their reporting.

Vanaski spoke a bit about her experience as a journalist in Pittsburgh and how she believed a lack of diversity and too much focus on “objectivity” watered down a story she wrote on a police-involved shooting.

The discussion on diversity within newsrooms then turned to whether a “diversity of opinion” ought to be extended to views editors consider too extreme. Coppins seemed to argue that certain views held commonly on the right, like on immigration and freedom of the press, should not necessarily be given a platform, even if they are held by significant parts of the population. For a market of ideas to work, with good arguments defeating bad arguments, Coppins said we needed a shared set of facts to work from. But he doesn’t believe we have that since so many dismiss the information journalists provide.

Hood pushed back and used the Hunter Biden laptop story as an example of mainstream media suppressing stories they deem unworthy to be consumed and having it blow-up in their face. He agreed that some guardrails are necessary for publications — meaning pro-child-abuse or moon-landing-conspiracy pieces shouldn’t be published — but overall, if it’s a view held by many and it’s somewhat based in fact, they should acknowledge it when covering a story.

The audience and those viewing on Zoom then asked a few questions of the panelists before the event ended.