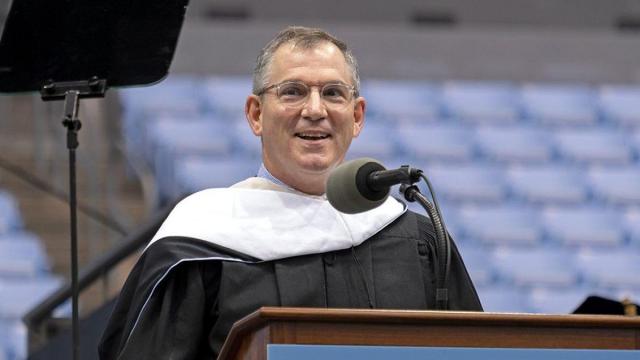 EDITOR'S NOTE: It is college graduation season and in the coming days we’ll feature commencement addresses from some universities and colleges across North Carolina. Here are remarks presented by Frank Bruni, columnist for the New York Times and Eugene C. Patterson Professor of the Practice of Journalism and Public Policy at Duke University, presented at the University of North Carolina commencement on Sunday, May 8, 2022. Watch the video of his address here.

Greetings, class of 2022! And, to cut to the chase, congratulations! You’re in this stadium, looking gorgeous in Carolina blue, because you’ve survived years of torment as well as triumph, of panic in addition to celebration, of knotted stomachs and racing hearts and fingernails bitten to the quick.

But we’re not here to talk about Carolina basketball.

That we’re here at all — our smiles unmasked, each of you less than 6 feet apart — feels like a minor miracle. There’s light at the end of the tunnel. Let’s bask in it. And let’s reserve a few words for the most beloved people in this stadium. Moms of Carolina, Happy Mother’s Day.

I’m so honored to be here with you all. I’m moved, because Carolina has such a special place in my heart. I spent my own college years here, working past midnight at The Daily Tar Heel . . . Rushing, just before the exam, to finish The Iliad . . . OK, to skim The Iliad . . . Never quite getting all the way to the pinnacle of Paradise Lost, probably because the chicken biscuits from Time-Out weighed me down. They were the perfect early-morning sponges after a late night of excess.

Not that I ever indulged in a late night of excess.

Actually, I did many questionable things, many foolish things, and one of the most foolish was this: I missed my own commencement back in the Mesozoic era, by which I mean 1986. I can’t remember the exact reason, or if there even was a particular reason. But I’m sure that it reflected a tendency of mine then . . . A tendency of mine for too many years after that, too.

I confused aloofness with sophistication. I mistook cynicism for smarts. And I failed, time and again, to feel and show adequate appreciation for the good fortune in my life.

That’s my simple plea to you today. That’s my advice as you graduate into this messy, beautiful world of countless challenges and endless possibility.

You have many, many important choices ahead of you:

But none of those choices will have as much bearing on your decency as a human being and on your happiness — your fundamental, enduring happiness — as a choice that you will make monthly, daily, even hourly.

And that’s whether you’re going to be somebody who counts her blessings . . . or somebody who tallies her slights.

Do you take humble stock of the good luck in your life? Or do you take angry inventory of the bad? Do you savor your strengths — or stew about your weaknesses?

I used to be a champion stewer. I could sulk with the best of them. I mapped the roads that were closed off to me rather than the roads wide open.  I had countless complaints when, really, I had none at all.

It took the sudden threat of blindness for me to see that.

Four years ago, I woke up with seriously blurred vision. Days later, I was told that I’d had a rare stroke; that my right eye would never again function properly; and that the same thing might happen to my left eye . . . and I could go blind.

I was in shock. And then I was really scared. And then I gave melodrama a whirl, regaling my friends with my misfortune and telling them, yes, there was something they could do: They could meet me at the side of my fainting couch with a martini shaker and gin.

WHY ME? I asked. The two stupidest words in the English language.

Why not me? I did a mental survey of the people around me and I realized that every one of them had suffered great loss . . . or overcome great pain . . . or was dealing with great hardship. They were widowed young.  Or a child of theirs had passed away.  They had Parkinson’s.  Or they were just starting chemotherapy.

My diagnosis wasn’t some singularly awful thing. It was just my thing.

Something about that shift in thinking led to other shifts. My vision improved — not the vision measured by an eye chart but the more meaningful kind.

I saw how rich I was in terms of family and friends . . . I saw that the clarity of the objects around me had no connection to the sharpness of the ideas in my mind. Yes, it was more difficult to work but editors still wanted that work. So did readers.  That was the relevant reality.  My advantages easily outweighed my disadvantages.

I wish I’d had that perspective before . . . I wish some half-blind curmudgeon in a gown had harangued me about it.

Your past few years have been frustrating ones. The pandemic hit and – boom – your social interactions were curtailed. Your professors were digital.  Cherished campus rituals were off limits.

Many of you felt cheated. With good reason.

But you know what? In crucial ways, you got a better education because of it. You learned things about yourself — and about life — that you wouldn’t have otherwise.

You learned that there’s no one way of doing things – that there are almost always ingenious alternatives, cunning workarounds. You learned that we humans are a uniquely adaptable species, adept at replacing forbidden diversions with fresh ones, taking our cocktail hours online . . . fashioning digital versions of birthday parties . . . finding salvation in sourdough cultures.

And you can choose to take comfort and confidence from that. You can regard what you’ve been through as empowering.

That’s the trick of happiness. That’s the key. You can agonize over what happened in the second half of that final game against Kansas.  Or you can exult in the fact that you were one of the last two teams standing and that you got there by beating a university down the road that I respect greatly but shall leave unnamed.

The habit of mind and heart that I’m talking about sometimes gets filed under the heading of gratitude . . . or optimism . . . or resilience. It’s the overlap of all three. That’s where you’ll find a special kind of wisdom.  A special tool for contentment.

Several years ago, a colleague of mine, John Leland, published a beautiful book about his time with people over 80-years old and what he’d observed about those who thrived. That cheerful cohort embraced their agency over their emotions.

As John wrote: “Take the blue pill and you’re bemoaning life without the sharp memory or the job that once made you special; take the red pill and you’re giving thanks for a life that still includes people you love. You can go to a museum and think: I’m confined to a wheelchair in a group of half-deaf old people. Or you can think, Matisse!”

The title of that book? Happiness Is a Choice You Make.

I came to this stadium yesterday to test the Teleprompter and was suddenly flooded with anxiety and anger. The angle of the screen, the size and shimmer of the text: They represented a potential disaster for eyes like mine. I cursed my lot.

I’m not recommending complacency. I want you to coax the best from the people around you – and from yourselves. I want you to reach high and dream big.  We’re all counting on that.

Some of those dreams will come true. Others won’t. That ratio won’t determine the buoyancy of your heart, or your peace of mind, because those aren’t ruled by any arithmetic.  They’re governed by attitude — by whether you fully cherish the highs and find grace in the face of the lows.

Master that . . . and you’ve mastered everything.

Again, I congratulate you all.

Is it too much to hope the "short session" will truly be short?
4:45 p.m. Thursday

The heartbreak of saying goodbye
April 14, 2022