HPU Poll: Nearly half of North Carolinians give Governor a positive approval rating 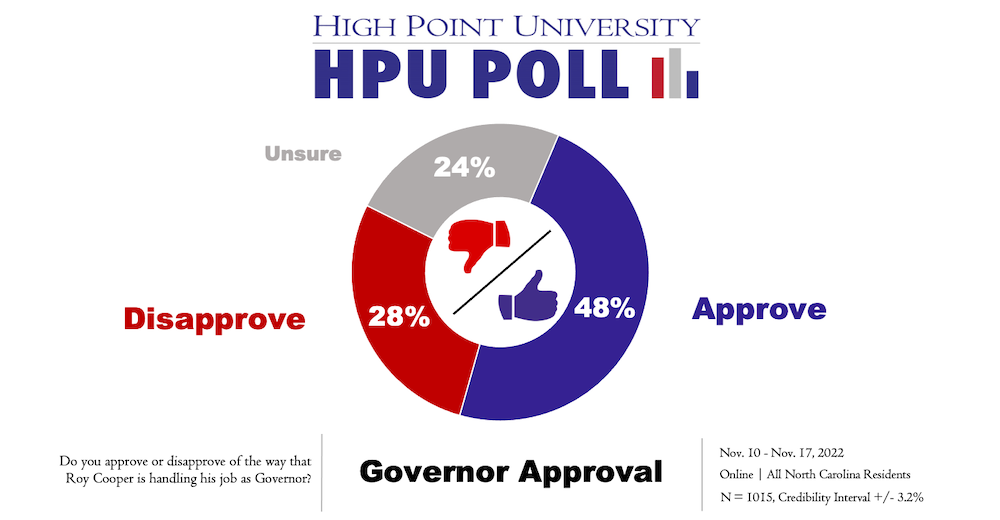 In a new High Point University Poll, North Carolinians gave Gov. Roy Cooper a job approval rating of 48%, while 28% said they disapprove and 24% did not offer an opinion either way.

These same respondents gave President Joe Biden a job approval rating of 32%. More than half (51%) of North Carolina residents said they disapprove of the job President Biden is doing.

A little less than one-third (31%) of North Carolinians said they approve of how the U.S. Supreme Court is handling its job, while about two in five (44%) said they disapprove. One-quarter (26%) of respondents did not offer an opinion either way.

The HPU poll also asked survey respondents if they have a favorable or unfavorable opinion on a variety of people and things. Of those, Gov. Cooper had the highest favorability rating at 49%. The governor was followed by Donald Trump (38%) and Joe Biden (37%). Kevin McCarthy (19%) and Mitch McConnell (17%) had lower ratings but were little known to North Carolinians with almost half (48%) and one-third (33%) saying they were unsure or not familiar with those leaders, respectively.

Among political institutions tested, the North Carolina General Assembly had a favorability rating of 38%, along with the U.S. Supreme Court (36%), and the U.S. Congress (25%). The poll also showed lower favorability ratings for several countries, China (11%), Russia (8%), Iran (7%) and North Korea (7%).

“The most recent HPU Poll continues to track favorability on several political figures, countries or things to gain insight on how North Carolinians are feeling,” said Brian McDonald, associate director of the HPU Poll and adjunct instructor. “This latest poll tracks almost a majority of respondents with a favorable opinion of our governor.” 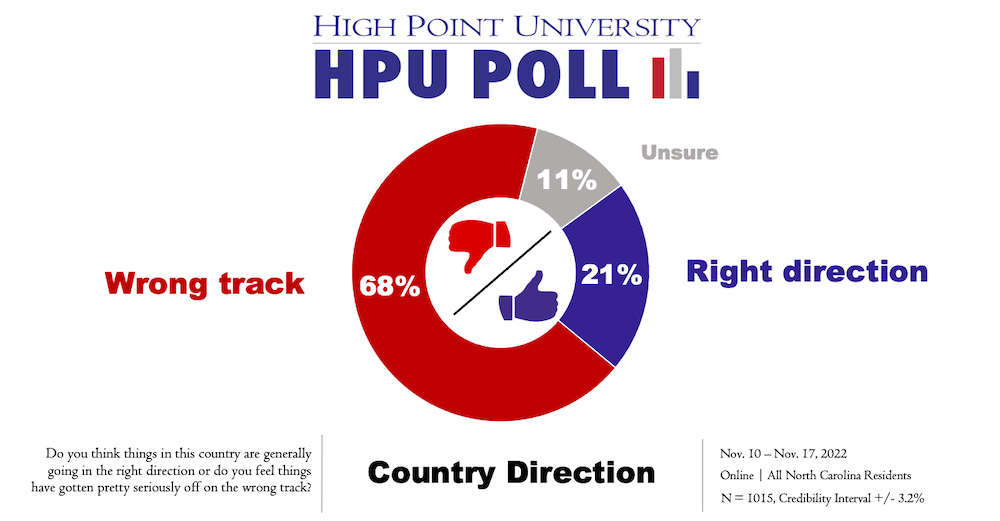 Do you think things in this country are generally going in the right direction or do you feel things have gotten pretty seriously off track?

Do you approve or disapprove of the way that Joe Biden is handling his job as president?

Do you approve or disapprove of the way that Roy Cooper is handling his job as Governor?

Do you approve or disapprove of the way that the United States Supreme Court is handling its job?

Do you approve or disapprove of the way that the U.S. Congress is handling its job? 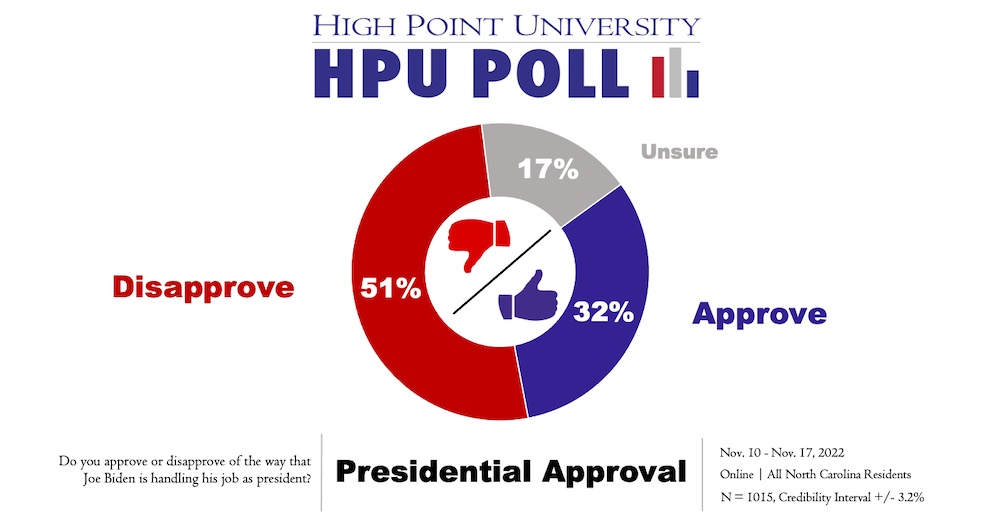 The most recent HPU Poll of 1,015 respondents was fielded by the High Point University Survey Research Center on Nov. 10 through Nov. 17, as an online survey using a panel of respondents recruited and maintained by Dynata. Dynata sent invitations to its panel of N.C. respondents and the SRC collected responses on its Qualtrics platform. The SRC did all data analysis. The online sample is from a panel of respondents, and their participation does not adhere to usual assumptions associated with random selection. Therefore, it is not appropriate to assign a classic margin of sampling error for the results. In this case, the SRC provides a credibility interval of plus or minus 3.2 percentage points to account for a traditional 95% confidence interval for the estimates (plus or minus 3.1 percentage points) and a design effect of 1.1 (based on the weighting). The data is weighed toward population estimates for age, gender, race/ethnicity and education based on U.S. Census numbers for North Carolina. Factors such as question wording and other methodological choices in conducting survey research can introduce additional errors into the findings of opinion polls.

Further results and methodological details from the most recent survey and past surveys can be found at the Survey Research Center website. The materials online include past press releases as well as memos summarizing the findings (including approval ratings) for each poll since 2010.