It was an insurrection. It is past time to stop spreading Trump's lies

This date, January 6, joins September 11 and December 7 as indelible blots on the history of the United States.

This date in 2021, like those in September 2001 and December 1941, mark unprovoked and unwarranted attacks from without and within, on America, its Constitution and the liberty and people for which it stands.

Those who serve in Congress or North Carolina elective and legislative offices -- who deny, equivocate or condone the Jan. 6, 2021 attack on the U.S. Capitol as anything other than a violent act to disrupt and overturn a fair election -- make a mockery of their sacred oath of office. What they need to do is refute the lies spouted by former President Donald Trump and condemn the actions of the January 6 insurrectionists.

Across the nation, state after state, legitimate audit after audit, there are certain undeniable facts: No votes were counted that should not have been counted; Joe Biden received 7,060,347 more votes than Donald Trump; and Joe Biden received 306 electoral votes and Trump just 232.

Yet, in North Carolina – where NO ONE has suggested that there were election irregularities that raised legitimate questions about the winners -- nearly every significant Republican officeholder or GOP official parrots Donald Trump’s big lie.

Astonishingly in one of the closest statewide elections in history -- for chief justice of the state’s Supreme Court which was won by Republican Paul Newby by a mere 401 votes (0.007% of the 5.4 million votes cast in the race) – the candidates accepted the results of the race as accurate and legitimate. No voter fraud. No stolen election. 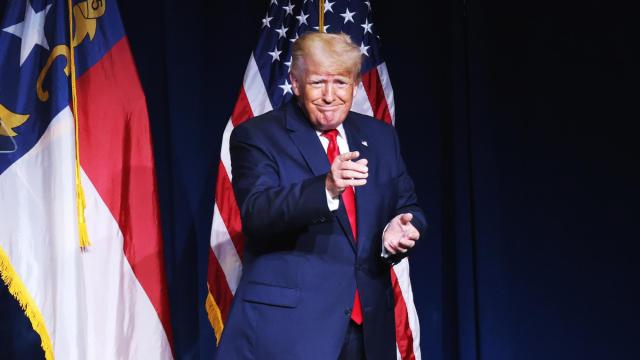 At the state GOP convention In Greenville last June Trump baselessly called the 2020 presidential elections “the crime of the century” adding “what happened in this country in the last election is a disgrace.” He repeated a series of falsehoods about election fraud and said he was “not the one who is trying to undermine American democracy.”

North Carolina Sen. Richard Burr, a Republican who has 27 years in Congress, spoke the truth a year ago when he said: “The President bears responsibility for today’s events by promoting the unfounded conspiracy theories that have led to this point. It is past time to accept the will of American voters and to allow our nation to move forward.”

Here we are, a year later. Sixteen North Carolina legislators joined 200 nationwide in signing a Nov. 23 letter that continues to seek overturn of the 2020 election and perpetuates the myth that “fraud and inaccuracies have been already shown” and elections were “certified prematurely and inaccurately.”

The actions a year ago in the Capitol in Washington weren’t playful moves in a political chess match. It was a violent act of rebellion. The assault was “one of the worst days of injuries for law enforcement in the United States since the Sept. 11, 2001, terrorist attacks.”

Insurrectionists rampaged through the halls of Congress, threatening the lives of legislators, assaulting police and others while trashing and looting. About 140 Capitol and local police officers were injured. Capitol Police officer Brian D. Sicknick was killed.

Those who perpetuate and peddle the Trump election lies like 16 who signed the Nov. 23 letter aren’t patriots and shouldn’t claim any such thing. They are anti-American insurrectionists.

Those who subscribe to the lies and falsehoods being peddled by former President Donald Trump and his followers have no business in Congress and should resign. Their support of a violent effort to block the orderly conduct of the business of our democracy is clear evidence of their lack of fitness to hold office.