I chuckled when I first saw the cartoon posted Jan. 15 by Wake County Democrats on their Twitter account. Visible below, and with the title “Bored of Education,” it depicts parents challenging school boards and administrators as racist, election outcome deniers, and conspiracy theorists.

The cartoon is funny in its outrageous depiction. Good cartoons can evoke outrage through humor. Yet, it’s even more humorous on another level. Politically, there’s an alarming tone-deaf nature to the illustration.

More blowback appears to be stirring at the ballot box against many public-school officials over prolonged shutdowns and a general distaste for authoritarian-style arrogancy. Legislators across the nation in bed with the bureaucratic education complex may soon find out they are far from immune.

The COVID-19 pandemic highlighted what many already know; public education is largely broken. Many well-paid administrators and bureaucrats will lose out on the decline of the status quo. Their lash outs — while politically unwise — are now predictable.

Even before Wake County published their cartoon, a similar controversy exploded in Michigan when the social media account for the state Democratic Party essentially downplayed any right of parents in having a say over educational content. Unaware of their own hubris, they deleted the post 36 hours after posting it.

Notable school choice advocate Corey DeAngelis noted that “they didn’t learn anything from Virginia.” Of course, the same is said for North Carolina.

Wake County Democrats pulled their cartoon, too. Still, they followed up by doubling down on the messaging — that parents, not schools or woke board members, are the problem in the education wars.

The war has been escalating for a while between parents and school officials. Virginia proved to be ground zero but it’s spreading like wildfire. And while controversies and outrage are magnified on social media, institutions are already drowning in a lack of credibility. Lashing out the customer base is bad politics and bad for business, as more and more families are looking for alternatives to the public school system.

Much more interesting than the political posturing and social media outrage over the actual cartoon is that it offered another layer of honesty about the views of the left concerning so many Americans and parents of students. Even more of the political chips are piled up on the table headed into the midterms. 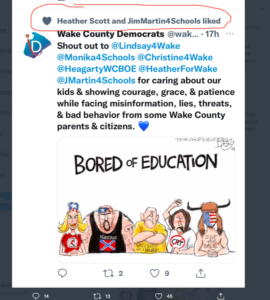 Honestly, one of the most fascinating and troubling aspects of our political culture today is the contempt that so many “experts” and government officials have for the citizenry they’re supposed to represent.

Instead of trying to be “woke”/politically correct and targeting parents who care about what schools are teaching their children, the FBI/Dept of Homeland Security should focus on actual threats like the jihadist who terrorized the Texas synagogue.

People often give politics too much credit for the good or bad in society today. Politics doesn’t usually solve that many problems — particularly on cultural issues. Yet, a lot can be rectified through elections, especially at the local level, when it comes to public education reform and school choice expansion.

At this point, it’s hard to even sound sane arguing against school choice. Maybe that’s why for the first time ever, Gov. Roy Cooper signed a proclamation recognizing School Choice week.

Parents are now noticing what their kids are learning or not learning. For years, the education establishment complained about a lack of parental involvement. Today, it’s surreal to see a reversal in that thinking by so many activists and administrators. It will be even more fascinating watching how it all plays out at the ballot box.