The Monday after Easter—rather than Good Friday — was a legal holiday in North Carolina for 52 years, and for many years before by tradition. The bill establishing the holiday was introduced by state Senator Paul Davis Grady of Johnston County in 1935.

According to Wake Forest University, Easter Monday games in Raleigh resembled 21st-century college football. Special trains were scheduled to bring fans to Raleigh from across the state. The stands were packed, and the crowds were enormous, sometimes drawing as many as 7,000 fans for a game.

Wake Forest and N.C. State (then known as North Carolina A&M) played their first baseball game against each other in 1894, with the Deacs taking a 15-4 win.

The first time the Deacons met N.C. State on Easter Monday was on April 16, 1900. The Pack scored the lone run in the ninth inning for a 1-0 win.

The two rivals met again on Easter Monday on April 8, 1901. It wasn’t until 1907 that the two schools started what would become an outstanding spring tradition. 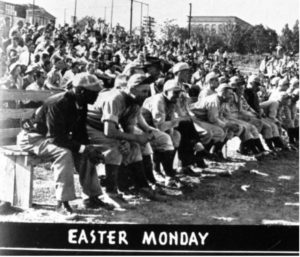 From 1899 Easter Monday developed into the greatest social event in North Carolina. The 3 girl colleges in Raleigh (Peace, St. Mary’s, and Baptist Female University (BFU), now Meredith) helped make it an outstanding Easter Parade leading all the females in the area to wearing Easter hats, dresses, and corsages to the ballgame.

The state legislature began adjourning to attend the game in their special carriages and/or automobiles.

In an interview with CJ, Peeler noted that the social aspect was often more important than the game results.

“Newspaper accounts paid great attention to the women who attended, what they wore, where they came from, what parties they attended, and who were their dates,” said Peeler.

That night, April 16, 1906, the Alpha Epsilon Chapter of Pi Kappa Alpha at A.&M. hosted the first of over 50 consecutive Easter Monday dances, known as the “Pika Ball”. In future years, N.C. governors attended the dance and the social sections in the local paper reported names of girls attending with their dates.

By 1907, the Seaboard Railroad was running newspaper ads about special excursion round trip trains from Henderson, Franklinton, Louisburg, Wake Forest, Norlina, and Oxford to Raleigh.

In 1923, the Pika Ball had over 4,000 in attendance. The Pika Ball spawned a post-Easter Mardi Gras with Raleigh social clubs all having socials that often coincided with dances following Easter Monday.

Easter Monday game at Wake Forest (Via W. Forest archives).
On April 19, 1935 (Good Friday), the N.C. General Assembly passed a law that made the following Easter Monday, April 22, a state holiday for government workers and for banks and business so everyone could go to the State-Wake Easter Monday baseball game.

As North Carolina started becoming a large banking headquarters, the lending institutions pressured the General Assembly to change the holiday from Monday to Good Friday, thereby joining the rest of the banks in the U.S. The legislature changed the state holiday to Good Friday, effective in 1988.

North Carolina was the last state in the union to recognize Easter Monday as a holiday.

Historical records from N.C. State and Wake Forest University were used in this report, as well as information from Tim Peeler’s book, The Easter Monday Baseball Game, available at Amazon.

There's never been a better time to invest in North Carolina
4:47 a.m. Friday