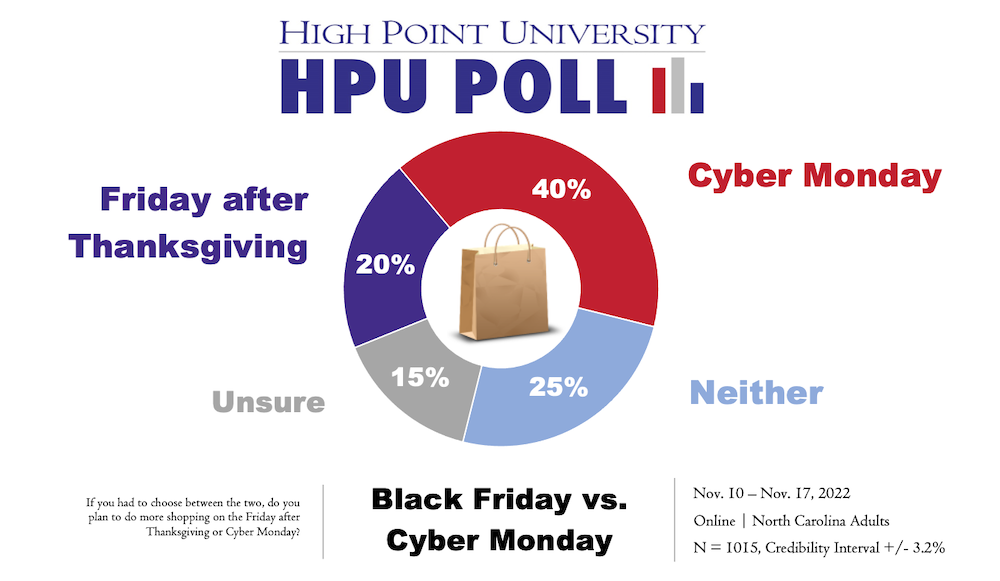 The poll shows 28% of North Carolinians plan to shop on the Friday after Thanksgiving, known as Black Friday. Just over half (52%) polled said they will not shop on Black Friday this year, while 19% are unsure. 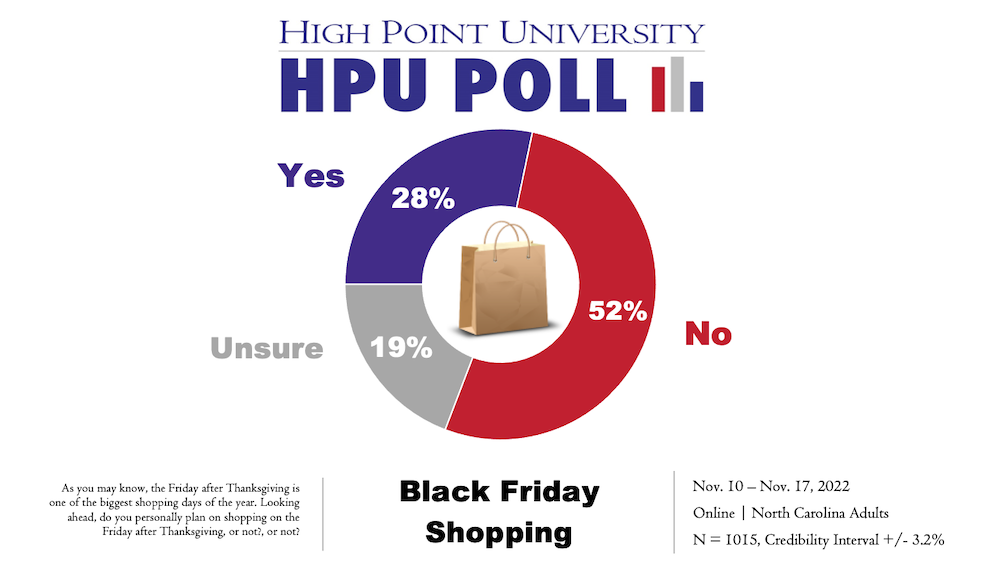 This finding is similar to the November 2021 HPU Poll when 28% of people in North Carolina said they would shop on Black Friday, compared to the 58% who said they were not going to shop. Only 14% said they weren’t sure if they were shopping on the Friday after Thanksgiving that year.

An additional 39% of respondents say they will do both equally.

“The pattern of increasing online purchases will continue this holiday season because of consumer convenience,” said Jerry Fox, associate professor of economics. “However, overall holiday spending, as supported by the HPU poll, will likely be similar to last year. One positive factor contributing to spending is ongoing low unemployment. But this is offset by the negative impact of high inflation and rising interest rates on holiday purchases.”

Changes in shopping behavior may be a result of rising costs and shipping delays. A majority (62%) of respondents said that their holiday shopping budget has been lessened by inflation and rising costs while about one-quarter (27%) said that their budget was not less. More than half (55%) of poll respondents said they were very concerned or somewhat concerned about shipping delays when it comes to holiday shopping this year. About two in five (39%) said they are not very concerned or not at all concerned about delays. 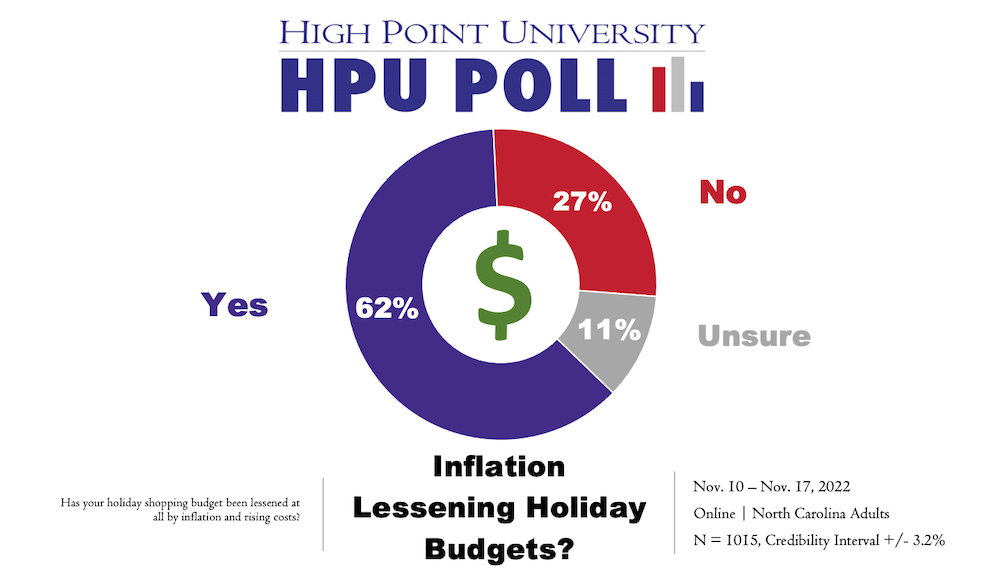 Do you plan to do most of your holiday shopping in brick-and-mortar stores or online this year?

If you had to choose between the two, do you plan to do more shopping on the Friday after Thanksgiving or Cyber Monday?

Thinking ahead to the holiday season, how much do you think that you will spend this year on gifts, food, decorations and other items related to your celebration of the holidays?

*Calculated based on n=986 numeric responses.

Do you think that you will spend more, less or about the same as last year on gifts, food, decorations and other items related to your celebration of the holidays? 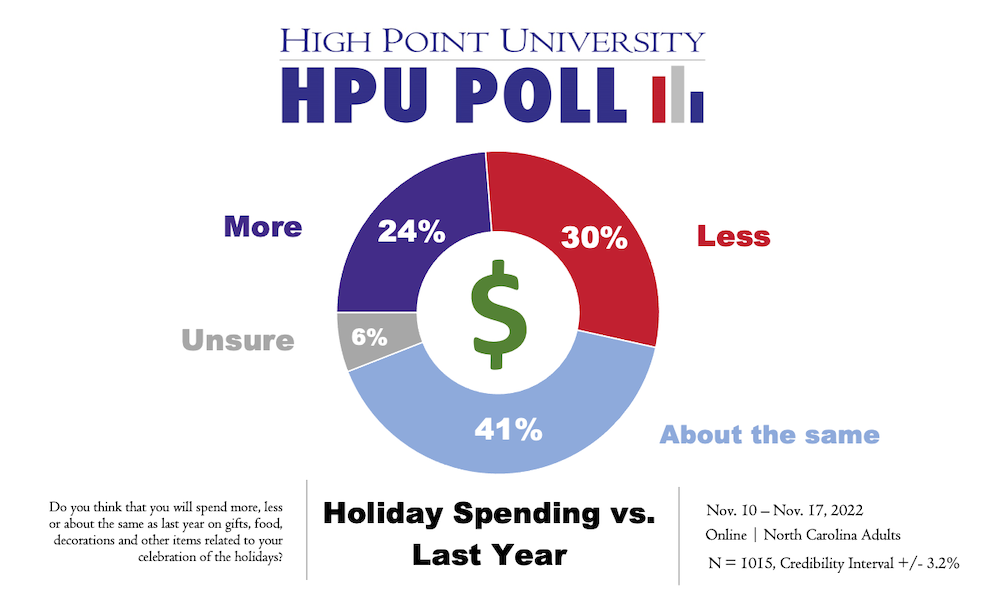 Has your holiday shopping budget been lessened at all by inflation and rising costs?

Compared to last year, do you think the holiday season will be more stressful, less stressful or about the same as last year?

The most recent HPU Poll of 1,015 respondents was fielded by the High Point University Survey Research Center on Nov. 10 through Nov. 17, as an online survey using a panel of respondents recruited and maintained by Dynata. Dynata sent invitations to its panel of N.C. respondents and the SRC collected responses on its Qualtrics platform. The SRC did all data analysis. The online sample is from a panel of respondents, and their participation does not adhere to usual assumptions associated with random selection. Therefore, it is not appropriate to assign a classic margin of sampling error for the results. In this case, the SRC provides a credibility interval of plus or minus 3.2 percentage points to account for a traditional 95% confidence interval for the estimates (plus or minus 3.1 percentage points) and a design effect of 1.1 (based on the weighting). The data is weighed toward population estimates for age, gender, race/ethnicity and education based on U.S. Census numbers for North Carolina. Factors such as question wording and other methodological choices in conducting survey research can introduce additional errors into the findings of opinion polls.

Further results and methodological details from the most recent survey and past surveys can be found at the Survey Research Center website. The materials online include past press releases as well as memos summarizing the findings (including approval ratings) for each poll since 2010.

The HPU Poll reports methodological details in accordance with the standards set out by AAPOR’s Transparency Initiative, and the HPU Survey Research Center is a Charter Member of the Initiative. See more information here.