The Elon University Poll conducted a survey of more than 1,200 N.C. voters asking for their thoughts on a range of topics that are factoring into this year’s general election.

Most North Carolina voters say they are more motivated to head to the polls during this year’s election, with many carrying with them a negative impression about the economy and how various economic factors have impacted their lives, the Elon University Poll has found. 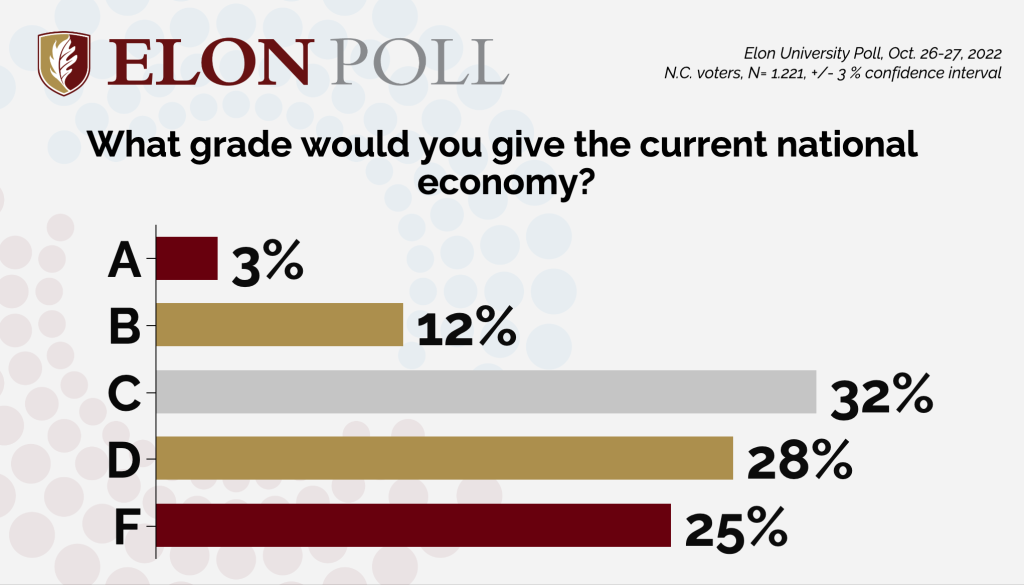 In the wake of the U.S. Supreme Court decision overturning Roe v. Wade, abortion access is top of mind with many N.C. voters, with 44 percent saying they have been following news about new or changing abortion restrictions “fairly closely” and another 28 percent saying they have followed that news “very closely.” While two-thirds of N.C. voters say they expect the decision to leave abortion restrictions up to the states will have little impact on them or their families, 53 percent say that they would be “somewhat” or “extremely” dissatisfied if abortion were to be banned in North Carolina.

Turning to the integrity of the 2022 general election, the Elon Poll found that confidence in the process and the results has improved slightly since the 2020 election. Thirty percent of N.C. voters say that they are “very” confident that the election process overall will be fair, compared to 24 percent in 2020. The poll found that 34 percent say they are “very” confident that votes will be counted properly this November compared to 24 percent in 2020.

“As a closely divided state, North Carolina is reflective of a national pattern in which neither party dominates on all issues for persuadable voters,” said Jason Husser, director of the Elon Poll and associate professor of political science. “As a result, campaigns are attempting to rally their bases while elevating their side’s preferred considerations on the top of unaffiliated voters’ minds. Our data suggests Republican candidates will do well to emphasize the economy while Democratic candidates have advantages on abortion, climate change, and race relations.” 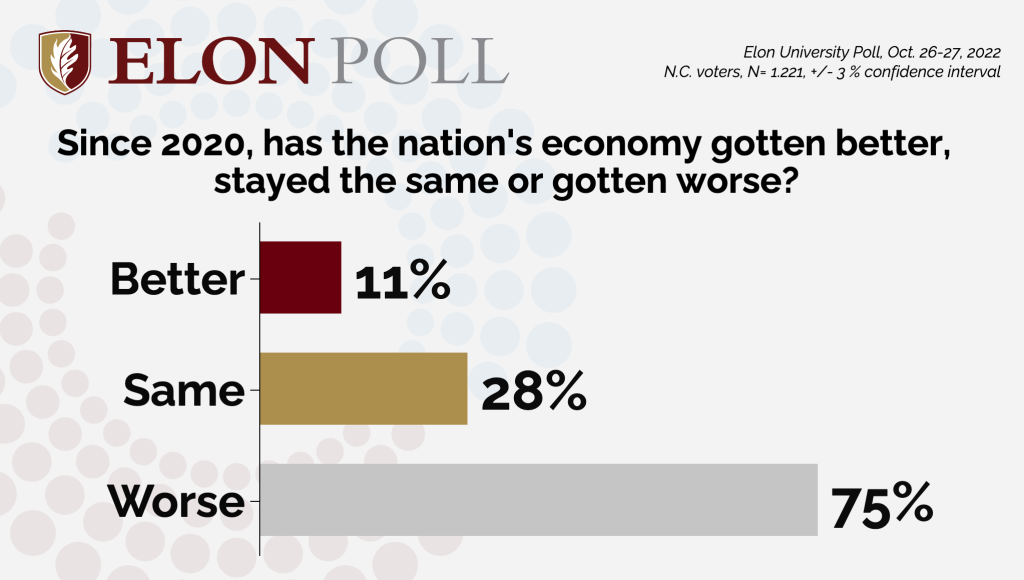 “Few North Carolina voters rate the economy highly, and four out of five say inflation is negatively affecting them personally,” Husser said. “A majority of voters think President Biden is at least somewhat responsible for inflation, and more voters favor the Republican Party over the Democratic Party on the economy as an issue. These findings combined with the historical importance of the economy on midterm elections portend trouble for Democrats on the ballot in North Carolina.”

The 2020 presidential election saw many discredited allegations of fraud, with many still contending that the election was not conducted fairly. While overall, confidence in the election process appears to have grown in North Carolina since that election two years ago, there is still a considerable split along party lines between those who think the November election will be conducted fairly and those who may question the results. 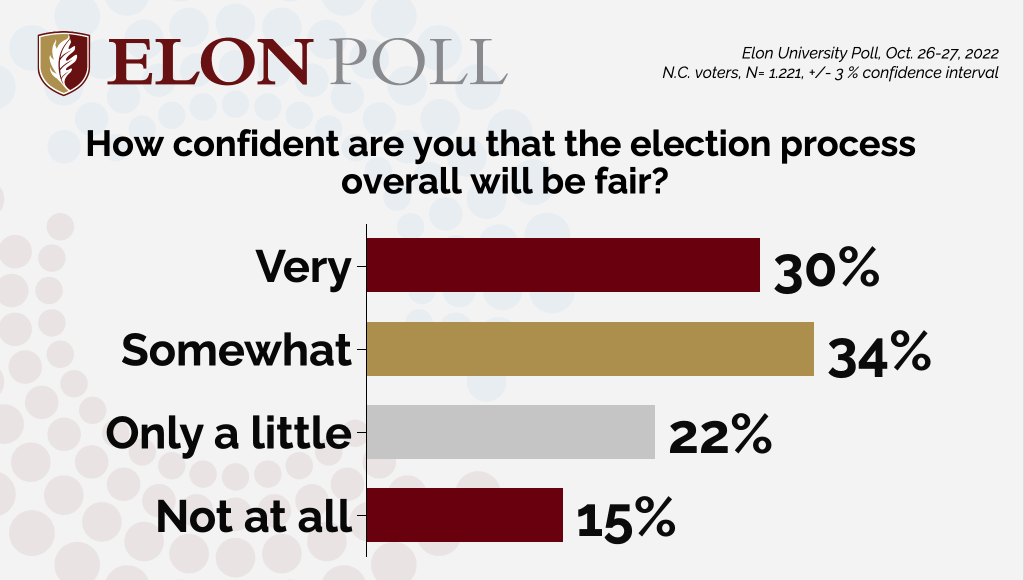 Republicans are also more concerned about ballots being cast by those who are ineligible to vote. Twenty-seven percent say they are “not at all” confident that “only legally eligible voters will be able to vote” compared to 5 percent of Democrats.

“While many North Carolinians continue to have concerns about the electoral process, we’re seeing an increase in confidence,” Husser said. “In particular, only half as many voters are very concerned about violence after the 2022 election compared to the 2020 election.”

Where there is some consensus around the issue of accessing the ballot box. There’s little variation by party affiliation when voters were asked whether legally eligible voters will be able to vote without running into any problems. Overall, 32 percent of N.C. voters say they are “very” confident that will be the case and another 43 percent say they are “somewhat” confident.

While fewer N.C. voters now expect that violence may follow the election than did during the presidential election in 2020, which was followed by the Jan. 6 attacks on the U.S. Capitol, more than half are still on edge that the results could spur violent behavior. Two years ago, 74 percent of voters said they were “very” or “somewhat” concerned about violence breaking out after the election compared to 56 percent now.

While many states moved forward with legislative efforts to restrict access to abortion following the U.S. Supreme Court’s decision to overturn Roe v. Wade, North Carolina has not yet moved in that direction. The Elon Poll has found that Republican voters in the state are more likely to say that any action by North Carolina on abortion restrictions would have no impact on them or their families. Seventy percent of Republican voters say leaving abortion restrictions up to the states to decide would “neither positively or negatively” them or their families compared to 56 percent of Democrats.