The partisan split on reopening colleges 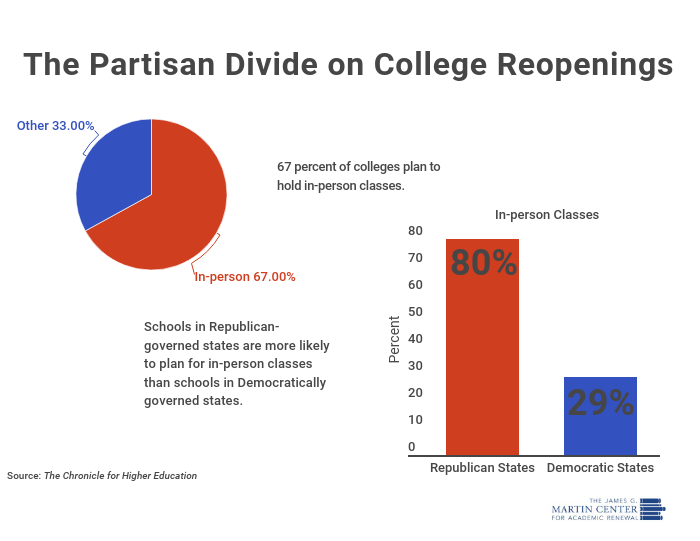 About 67 percent of four-year colleges plan to re-open in the fall for in-person classes, according to The Chronicle of Higher Education.

Those numbers support the claim that the decision to reopen in the fall is, in part, based on partisanship. Most “purple” states with Republican governors voted for Trump in 2016; only one, New Hampshire, voted for Hillary Clinton. Yet, 80 percent of schools still plan to reopen. Even most of the “purple” states that did not vote for Trump still plan to have in-person classes.

Partisanship isn’t the only factor that influences the decision to reopen schools, though. The size, selectivity, density, and amount of government funding also sway the choice for in-person classes.

The largest universities will struggle more with social distancing. Rural colleges will find it easier than urban colleges. And colleges that received less federal funding through the CARES Act are more likely to reopen in the fall—a sign that colleges keep an eye on paying their bills to stay open along with health and safety.

Even though colleges have time before students arrive to test their solutions, restaurants, shops, and small businesses demonstrate the need to reopen in order to survive.

While restaurants and retailers begin to reopen, Lozano Rojas, a professor at Indiana University, noted that the fear of getting sick may still prevent people from working or consuming goods. However, that fear stems from the states that are typically slow to reopen while states like Florida have reported plenty of business in restaurants and on beaches.

Though the type of college and economic considerations influence campus reopening, the data show that the partisan leanings of a state weigh heavily on the decisions made on campus.

Kathryn Goodwin is a Martin Center intern and a junior studying political science at the University of North Carolina at Chapel Hill.