If the state Supreme Court decides to remove two Republican justices from hearing a high-profile case involving voter ID, the court also should remove Democratic Justice Anita Earls. That’s according to a new motion filed Wednesday in the case.

It’s the latest development in a legal dispute Carolina Journal has covered at ExtremeInjustice.com.

“[I]f this Court determines it has the need and authority to take the unprecedented step of deciding involuntary recusal of justices, … then this Court should examine the impartiality of Justice Earls and disqualify her from consideration of this matter,” reads the motion from attorney Martin Warf. He represents legislative leaders in the case titled NAACP v. Moore.

Legislative defendants argue that the Supreme Court should not act to remove any justices from hearing the case. Such a step would be “unprecedented,” Warf writes. The request to remove Earls would move forward only if the court decides to proceed with “involuntary recusal” of her colleagues Tamara Barringer and Phil Berger Jr. 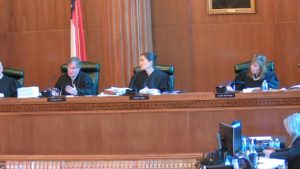 Removing Earls would fall in line with the argument that the case’s plaintiffs have made for removing Barringer and Berger, Warf’s motion explains. “[U]nder Plaintiff’s proposed system, a litigant is forced to move to disqualify a justice in order to receive the transparent due process protection that Plaintiff believes is lacking currently in this Court.”

The motion explains that Earls, before joining the Supreme Court, represented the plaintiffs in another lawsuit, Covington v. North Carolina, “that is at the root of this case,” Warf writes. In her role representing the NAACP, Earls labeled the General Assembly “usurpers.” That’s the same argument plaintiffs in the current case are using to block state constitutional amendments for voter ID and lowering a state income tax cap.

“Plaintiff argues that this case is a matter of an unfinished remedy,” Warf writes. “Plaintiff now seeks the perceived state court remedy of voiding the work of the Legislature that remained in place following the federal court’s decision. … It is a state court argument rooted in Covington, nurtured by Justice Earls in federal court and the trial court below, that Plaintiff hopes bears fruit with this Court.”

Earls “made the original novel argument to the federal court that Plaintiff parrots to this Court,” Warf writes. “Justice Earls used support from Plaintiff’s counsel and Plaintiff in crafting the argument that members of the General Assembly were usurpers due to redistricting violations, and the laws that the Legislature passed were void.”

There has been no “intervening precedent” or “change in the theory” since Earls moved from working as a private attorney to serving as a Supreme Court justice, Warf writes. “Plaintiff argues the same cases to Justice Earls that she argued were persuasive to the federal court,” he writes. “The difference is now Justice Earls is positioned to decide whether the unique theory of state law she argued to the federal court in Covington actually is the law of the State.”

Legislative defendants have legitimate reasons to believe that Earls considers the General Assembly “usurpers,” Warf explained. “When Justice Earls argued in Covington that, based on redistricting violations, the members of the General Assembly became usurpers and their acts were void, ‘a perception could be created in the mind of a reasonable person’ that Justice Earls holds that to be true ‘and that it would be difficult for the defendants to receive a fair and impartial [review] before [Justice Earls].’”

“The authority of the General Assembly is the crux of this case — authority that Justice Earls has already argued was lacking,” Warf writes.

The motion also cites Earls’ membership in the NAACP. As plaintiffs in NAACP v. Moore, the organization argued that its case is based on defending its individual members’ rights. “According to Plaintiff then, having Justice Earls hear this case would violate the judicial maxim that ‘no man is allowed to be a judge in his own cause,’” Warf writes. “In other words, because Plaintiff is advocating for change on behalf of its members — it is their constitutional rights that Plaintiff is seeking to advance before this Court — Plaintiff is calling on Justice Earls, as a member of Plaintiff, to decide what her own asserted rights are.”

“Her impartiality in the matter may reasonably be questioned.”

Despite these concerns, the legislative defendants would prefer not to have to ask the Supreme Court to remove Earls. “Defendant-Appellees made clear in its original response to Plaintiff’s recusal motion that it believes the best and only proper outcome is give each justice the respect he or she deserves and allow this Court’s long-standing procedure to work.”

The “long-standing procedure” is to allow each justice to decide for himself or herself whether to take part in a case or to step away voluntarily through recusal. The court should consider removing Earls only if it abandons its tradition and moves forward with removing Barringer and Berger, according to Warf’s motion.

The motion focusing on Earls arrived as both parties in NAACP v. Moore submitted final briefs this week on the issue of forced removal of justices.

“[T]he question before the Court boils down to whether it can, and should, amend the law governing recusal to provide a new mechanism for forcing the recusal of a Justice against his or her own best judgment — and, if so, what the proper method of promulgating such an amendment would be,” he writes. “Plaintiff’s answer to this question urges the Court to ignore the constitutional and statutory limits on its authority in this context and join the avant-garde movement by a minority of States that have experimented with involuntary recusal in their courts of last resort.”

“Involuntary recusal may be a favorite of certain special-interest groups … who have steadfastly opposed democratic election of judges,” Warf adds. “But the practice is a stark departure from the settled practice that endured for centuries of Anglo-American law and is still in place today in a supermajority of States and the U.S. Supreme Court.”

“For multiple reasons, the Court should decline Plaintiff’s invitation to depart from this settled practice by joining the ongoing experiment by the few States that have adopted involuntary recusal. And in no event should the Court adopt such a rule in the context of a specific, politically charged case.”

On the other side of the case, Kimberley Hunter of the Southern Environmental Law Center uses her latest brief to urge the Supreme Court to consider forced removal of justices.

“Our system of courts offers a litigant — regardless of societal station — a venue to enforce her right to protection against violations of the law, including violations committed by majoritarian actors,” Hunter writes. “Elsewhere in society, such actors may rely on undue favor by way of political, economic, or social power to act without fear of consequence. But in a system of truly impartial and independent courts, our judiciary ensures the fair administration of justice to all, regardless of station.”

“In this way the Court can best ensure it continues to administer justice in a way that is fair and unbiased, and has the respect of the public.”

The new briefs and the motion to remove Earls all result from the NAACP’s request in July that the state Supreme Court force Barringer and Berger off the NAACP v. Moore case. The case will determine whether voter-approved constitutional amendments for voter ID and a state income tax cap will be allowed to stand.

The NAACP objects to Barringer’s participation because she was a state senator when the General Assembly placed the amendments on the state ballot in 2018. Plaintiffs object to Berger because his father is the top officer in the Senate and a named defendant in the case.

Neither Barringer nor Berger has expressed willingness to step away from the case voluntarily. The Supreme Court asked in September for parties in the case to address the NAACP’s request for forced removal.

Now that all briefs have been filed, the Supreme Court will consider whether to proceed with forcibly removing justices for the first time in the court’s history. No timetable has been set for a ruling.