What might be the electoral dynamics of the 2022 legislative districts?

As I write this blog post on Thursday, Dec. 9, to say that this week has been yet another wild roller-coaster ride in the state's politics is probably stating the rather obvious. With the back and forth and back of candidate filing (or not) for the March 2022 primary election, the end result appears to be that the North Carolina Supreme Court has ordered the March primary to be moved to May, with all candidate filings suspended (not just for legislative races, but all contests).

In that same order, the state's highest court directed the three-judge trial panel to hold its proceedings and issue their ruling by January 11, in about a month's time, a fairly quick turnaround considering the looming holidays.

In this trial, the major question posed by those challenging the new congressional and state legislative district maps will center on the claim of partisan gerrymandering, as noted in the plaintiff's complaint:

"In creating the 2021 Plan, Legislative Defendants “specifically and systematically design[ed] the contours of the election districts for partisan purposes and a desire to preserve power.” ... The 2021 Plan “unlawfully seek[s] to predetermine election outcomes in specific districts” and across the state as a whole. Id. Because of Legislative Defendants’ extreme partisan gerrymandering of the 2021 Plan, congressional elections in North Carolina are not “conducted freely and honestly to ascertain, fairly and truthfully, the will of the people.” ... In particular, the 2021 Plan takes the three largest Democratic counties in the state and trisects each one among different congressional districts, effectively diluting Democratic voting power throughout the state. And it packs the remaining Democratic strongholds into a handful of congressional districts, resulting in a map that produces 10 safe Republican seats, 3 safe Democratic seats, and 1 competitive seat." (page 41).

In response, the Republican legislative defendants contend that just because the challengers to the maps drop the claim of "gerrymandering" doesn't make it so, arguing that:

"The 2021 redistricting was the most transparent and non-partisan legislative redistricting in North Carolina history. The General Assembly adopted a criterion barring “[p]artisan considerations and election results data,” and it is entitled to a presumption that it and its members adhered to this rule. The 2021 Plans were drawn in public in recorded sessions, and the General Assembly presented an extensive legislative record establishing the purposes of district lines at a granular level." (page 2)

It will be up to the courts--and most likely, the state's supreme court--to resolve this matter. And that will be a political battle in and of itself with a 4-3 Democratic majority on the high court.

For the time being, it might be helpful to view the new districts in the dynamics of what has happened in the past regarding the electoral performances. Many analysts use past election results to try and evaluate the partisan nature of areas, most notably legislative districts.

For example, the Cook Political Report uses their Partisan Voter Index (PVI) to analyze congressional districts, and bases their criteria on the following:

Here in North Carolina, two other organizations have evaluated the new maps. The North Carolina Free Enterprise Foundation, a business-oriented research organization, evaluates the districts using their Partisan District Index which uses election results from the 2014, 2016, and 2020 federal and Council of State elections.

"It is a measure of the base partisan leanings of a North Carolina state legislative district compared to the state as a whole. For each district, the CPI score lists the party (identified by initial, D or R) the district tends to favor followed by a number indicating the relative lean of the district toward that party. For example, a district that tends to vote about 7 percent more Democratic than the state average would have a CPI score of D+7. The 2020 CPI took precinct-level results of the ten 2020 Council of State races using data from the North Carolina State Board of Elections..."

Now, for folks that might think "using past elections results don't necessarily indicate what might happen in the future," I'd offer these two pieces of evidence to support using election results.

These scatterplots of Trump's 2016 electoral performance within the 2018 court-ordered redrawn maps shows how close the presidential vote performance is to the respective Republican candidates for both state house (first scatterplot) and state senate (second scatterplot): 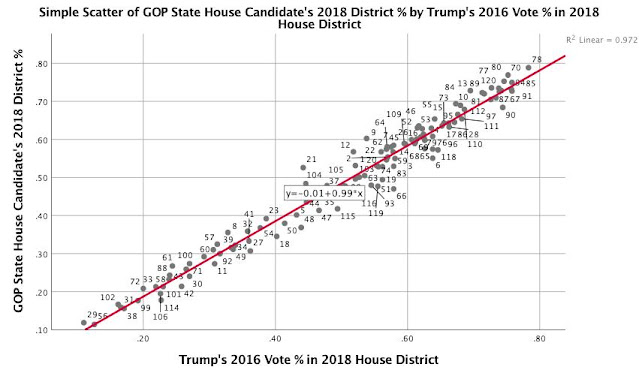 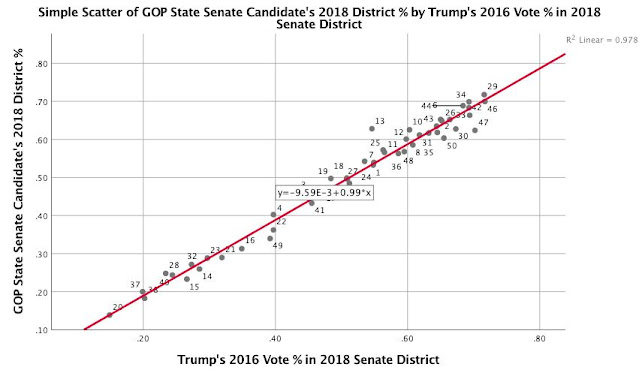 Even when the districts changed due to the court-ordered redistricting, Trump's 2016 vote performance aligned with the resulting 2018 Republican state candidates' performances in the new district. That means the underlying dynamics--for better reference, the performance of precincts within the districts--tends to hold steady.

In a nutshell, what this tells me is that using presidential vote performance can give a strong indication of the future vote performance of a party candidate, even when the district lines are moved.

With that, I pulled the precinct-level results for the 2016 and 2020 presidential, U.S. Senate, and gubernatorial elections and assigned the precincts to the new 2021 state house and senate districts. A few precincts were split between districts, according to the StatPack report for each map. When a precinct was assigned to two different districts, and one district possessed more than 90 percent of that precinct, I assigned that precinct to the 90 percent district.

For the state house, the StatPack report indicates seven precincts were split, with three of them having 90 percent in one district (thus they were assigned to that district). The remaining four were excluded from this analysis. The state senate StatPack report indicates nineteen precincts were split, with ten of them having 90 percent in one district; the remaining nine precincts were excluded. The likelihood that these excluded precincts having a dramatic impact on the analysis is fairly small.

With the respective precincts assigned to the new districts, I calculated the combined Republican and Democratic votes for new districts based on the 2016 and 2020 presidential, U.S. Senate, and gubernatorial contests for each precinct.

Conversely, in the new State Senate District 40 for both year's elections, 410,748 votes went to the six Democratic candidates, while the six Republican candidates garnered 85,402, which equals to 83 percent Democratic (the most Democratic district in the newly-drawn state senate).

For the state senate districts, here is the distribution using the above methodology and classification: 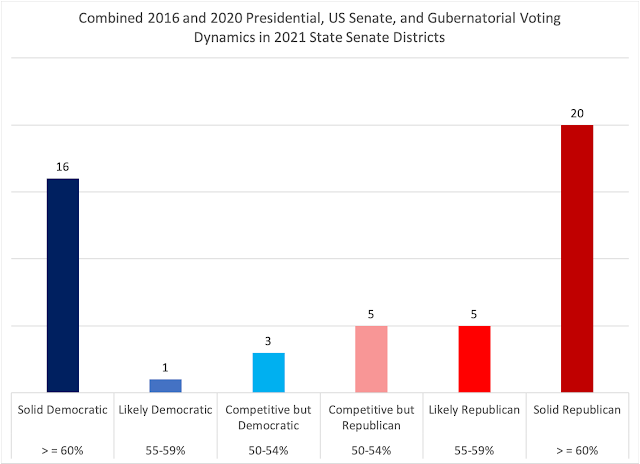 Republicans have an advantage of 25 senate districts that are likely or solid, with only one more needed to achieve a working majority. If Republicans were able to win all of the competitive-but-Republican/likely/solid districts, they would have a 30-seat, and thus super-majority, in the upper chamber.

For those interested, you can find the spreadsheet with the individual districts and their votes and classifications here.

For the state house districts, here is the distribution based on the above methodology and classification: 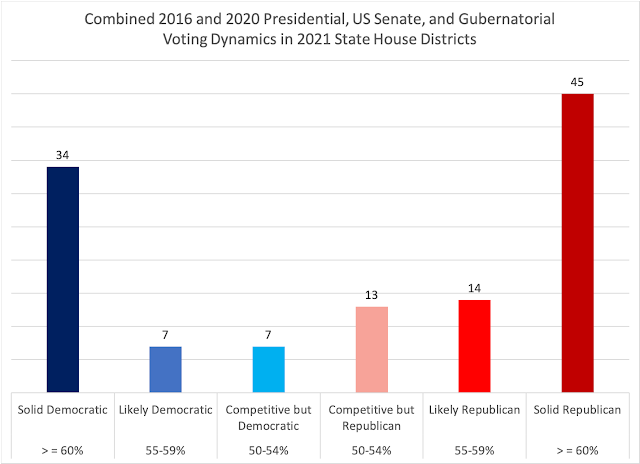 With both likely and solid Republican districts, they would have a potential 59 seats in their column, two fewer to take working majority control of the lower chamber. If Republicans achieve all 72 districts, they would also have a super-majority control of the state house.
For those interested, you can find the spreadsheet with the individual districts and their votes and classifications here.

For those not from North Carolina, 'super-majorities' (meaning 30 in the state senate, 72 in the state house) equals three-fifths of the chamber's membership and thus the legislature's ability to override gubernatorial vetoes.

Returning back to the pending litigation, what will be at the heart of the trial over the next month will be: do the maps that have the potential to elect super-majorities (60 percent in each chamber) equate to partisan gerrymandering, or might the districts reflect the natural dynamics of how North Carolinians have voted and perhaps sorted themselves and thus merely reflect the natural consequences of a sorted and partisan-driven geography?

Perhaps independent analyses, such as those by the Duke University's Mathematics Department and their Quantifying Gerrymandering Project, can provide some insights to the question as well.

Ultimately, the answer to this latest partisan gerrymandering controversy will be left up to those in the black judicial robes to determine.

Dr. Michael Bitzer holds the Leonard Chair of Political Science at Catawba College, where he is a professor of politics and history and author of the Redistricting and Gerrymandering in North Carolina: Battlelines in the Tar Heel State. He tweets at @BowTiePolitics.