Nearly three out of four North Carolina voters are concerned that the war in Ukraine could escalate into World War III, according to results from a WRAL News poll released Thursday. Nonetheless, a majority of respondents supports sending U.S. troops to defend NATO countries from Russia.

Thirty-two percent of respondents said they're very concerned and 42% are somewhat concerned that the Ukraine conflict could turn into World War III. Fourteen percent were slightly worried, and just 5% of voters said they weren't concerned at all.

The survey was conducted by SurveyUSA, which polled more than 2,000 registered voters across the state. 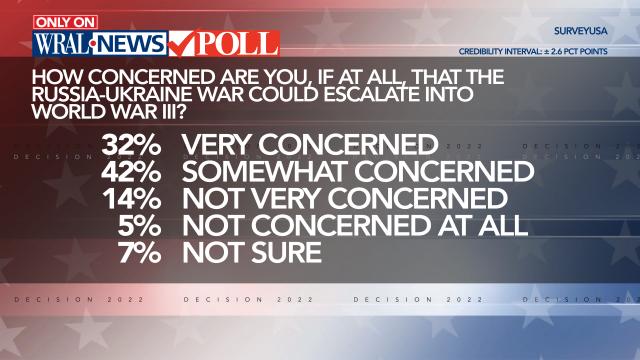 "Russia and the United States are the only two countries in the world that have what we could call 'civilization-extinguishing' nuclear capacities," Duke University professor Simon Miles, an expert on Russia and the Soviet Union, told WRAL News. "I think a lot of Americans are seeing this conflict play out with this sort of this context, and this escalatory capability that is very new in U.S. military involvement worldwide in the most recent years."


The recent wars in which the U.S. has been involved have been at arms' length and against countries less able to retaliate, Miles said.

Miles noted that in the Vietnam War, Soviet fighter pilots participated in firefights against U.S. forces, but that conflict didn't turn into a nuclear conflagration.

"That was kept very managed," he said. "I hope it doesn't come to that. But I think Americans can take solace from how these types of situations have been managed in the past."

WRAL News also asked voters if they would support sending U.S. troops to defend NATO countries from any attack by Russia. The majority, 52%, said yes. Meanwhile, 23% said no, and 25% weren't sure. 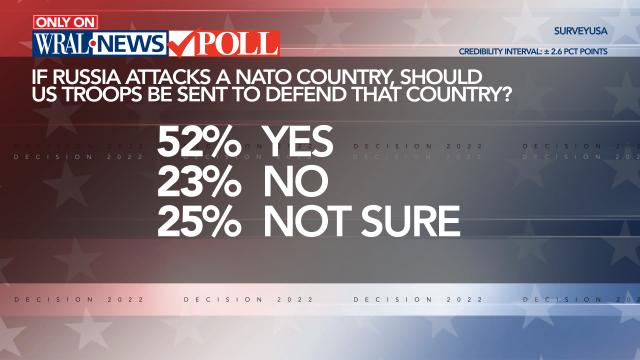 Bruce Jentleson, a Duke professor with expertise in polling and foreign policy, said 52% is fairly high support for use of force. But he noted there's a significant age gap. While 65% of voters ages 65 and older would support NATO, only 43% of voters between 18 and 34 would.

Younger generations are more skeptical of the usefulness of military force, Jentleson said, because they grew up with wars in Iraq and Afghanistan, "neither of which were particularly successful, and [they] lasted 20 years each."

"The millennials and Gen Z are not isolationists," he said. "They want to engage internationally. They just aren't as convinced as older generations that the way we used to do it is the right way going forward."

Older voters who lived during the Cold War see the issue differently, Jentleson said, although the two groups are equally concerned about World War III.

"The younger generation is saying, 'We're worried that if you do respond militarily to a Russian invasion of a NATO country, that will lead to nuclear war,'" he said. "And the older [generation] is saying, 'That may help us not get to nuclear war,' right? They're both consistent in their views, but they're using sort of a different strategic logic." 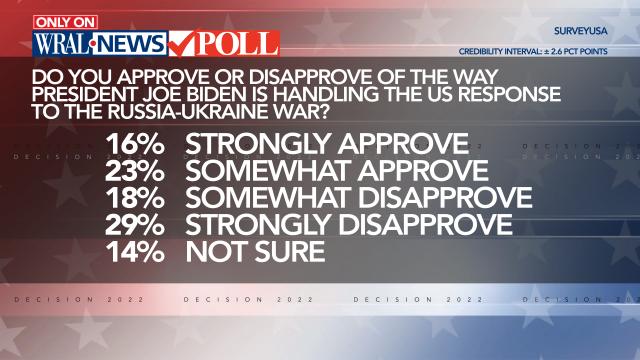 The results were starkly partisan. Just 16% of Republicans approved of Biden's handling compared to 69% of his fellow Democrats.

Miles said disapproving voters may have wanted either more or less U.S. involvement in the conflict. He thinks Biden's approach has been overly risk-averse at times, but he said the administration is taking the right steps to help the Ukrainians without direct U.S. combat involvement.

"When you're talking about dealing with a nuclear power like the Russian Federation, I have a lot of sympathy for those who are choosing to play it safe, policy-wise," Miles said. "That's certainly not a bad-faith choice, given the consequences. But I think that Americans should know that the Biden administration is very clear, and I think being very careful, to manage that risk as much as possible."

Jentleson agreed, pointing out that the U.S. took no military action when the Soviet Union invaded Hungary in 1956 and Czechoslovakia in 1968.

"Even in the middle of the Cold War, we did not escalate because of concern about climbing that nuclear ladder," he said. "And when the president has said why—I think his expression is—not an inch of NATO territory, but why we're not going into Ukraine, that's been both said and understood."